The Ship that Wouldn't Die 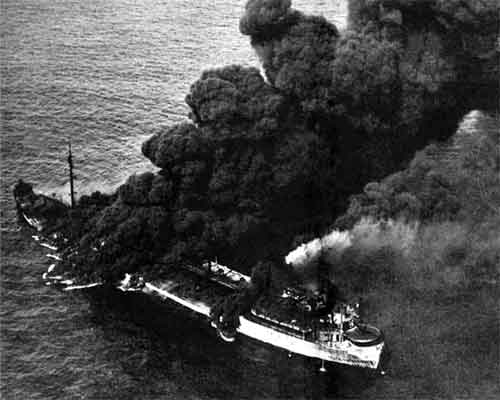 Acclaimed author Don Keith tells one of the most inspiring sea stories of World War II: the Japanese attack on the American oiler USS Neosho and the gutsy crew’s struggle for survival as their slowly sinking ship drifted—lost, defenseless, and alone—on the treacherous Coral Sea.

'Keith keeps his facts straight, doing justice to Neosho, Sims, and the men who fought courageously in a crucial but unappreciated role at the Battle of the Coral Sea. The Ship That Wouldn’t Die makes a good read.'  -- HistoryNet.com

In May 1942, Admiral Jack Fletcher’s Task Force 17 closed in for the war’s first major clash with the Japanese Navy. The Neosho, a vitally important tanker capable of holding more than 140,000 barrels of fuel, was ordered away from the impending battle. Minimally armed, she was escorted by a destroyer, the Sims. As the Battle of the Coral Sea raged two hundred miles away, the ships were mistakenly attacked by Japanese dive bombers. Both crews fought valiantly, but when the smoke cleared, theSims had slipped beneath the waves, and the Neosho was ablaze and listing badly, severely damaged from seven direct hits and a suicide crash. Scores of sailors were killed or wounded, while hundreds more bobbed in shark-infested waters. Fires on board threatened to spark a fatal explosion, and each passing hour brought the ship closer to sinking. It was the beginning of a hellish four-day ordeal as the crew struggled to stay alive and keep their ship afloat, while almost two hundred men in life rafts drifted away without water, food, or shelter. It would be nine days before any of them would be rescued.

Working from eyewitness accounts and declassified documents, Keith offers up vivid portraits of Navy heroes: the Neosho’s skipper, Captain John Phillips, whose cool, determined leadership earned him a Silver Star; Lieutenant Commander Wilford Hyman, skipper of the Sims,  who remained on his vessel’s bridge throughout the attack and made the ultimate sacrifice to try to save his ship; Seaman Jack Rolston, who pulled oil-soaked survivors out of the water and endured days adrift in an open life raft; and Chief Watertender Oscar Peterson, whose selflessness saved the lives of innumerable shipmates and earned him a posthumous Medal of Honor.

A tale of a ship as tough and resilient as its crew, The Ship That Wouldn’t Die captures the indomitable spirit of the American sailor—and finally brings to the surface one of the great untold sagas of the Pacific War.

Available wherever books are sold or visit these on-line booksellers to purchase, read excerpts, and learn more:

ORDER THE AUDIO CD edition of The Ship that Wouldn't Die