In the Course of Duty 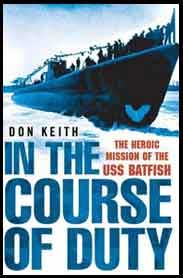 It is the waning days of World War II and a desperate enemy is doing all he can to hang on, to regroup, to continue the fight in a final, deadly quest for victory. The Imperial Japanese Navy has reportedly dispatched four submarines to the Philippines on a clandestine mission to extract military personnel, collaborators, top-secret documents and—according to rumor—a fortune in gold, all ahead of the imminent liberation of the island nation by General Douglas MacArthur in his historic “return.”

"LOOK INSIDE THE BOOK," ORDER YOUR COPY OF IN THE COURSE OF DUTY

The USS Batfish, a fleet submarine, is part of an American wolfpack sent to the waters north of the Philippines to intercept the enemy boats. Soon she and her brave crew will accomplish one of the most amazing feats in naval history. But this is not only the true story of a series of small victories that contributed mightily to the win in the Pacific. It is also the very personal account of Batfish’s crew, a typical group of amazingly young submariners who become members of a strong-bonded brotherhood. But this book is also the madcap story of how their vessel came to rest today in the middle of a bean field in Oklahoma. That's right, a submarine, high and dry in what was once the Dust Bowl and in the heart of the Cherokee Nation.

In writing this amazing-but-true tale, Don Keith relied on research and actual war records, but also on hours of interviews with the men who actually sailed Batfish through enemy waters, and with the determined former sub sailors who decided they wanted themselves a submarine, no matter what obstacles stood in their way, as a memorial to their shipmates who died -- in the course of duty.

Click HERE to purchase your copy of IN THE COURSE OF DUTY.

PRAISE FOR IN THE COURSE OF DUTY

"To sink one enemy sub is quite something, but to sink three in a single patrol, while coping with one of your own torpedoes jammed part way out of the launch tube with the potential of...blowing your own boat to bits -- now that’s the Super Bowl of submarine warfare. Well told. A fascinating and inspiring true adventure."
-- Captain William R. Anderson, author of Nautilus 90 North, co-author The Ice Diaries, veteran of eleven WWII submarine combat patrols, and commander of Nautilus for her historic 1958 under-ice Arctic crossing through the North Pole.

“The saga of USS Batfish serves as a stirring reminder of the hard-fought campaign waged by American submarines 60 years ago. In the era before nuclear power, ICBMs and deterrence, submariners were genuine warfighters who spared neither their boats nor themselves in pursuit of the ultimate naval mission: sink the enemy.”
-- Barrett Tillman, Author, Clash of the Carriers

“The crew of the Batfish personifies the courage exhibited by our submariners then, and now. This is a must read for anyone who has a concept of duty, honor, and service to one's country.”
-- Robert Vaughan, Author, Whose Voice The Waters Heard, helicopter pilot in Korea & Vietnam, US Army, retired

"Don Keith has the unique ability to make the reader an intimate part of the action. Anyone who experiences this thrilling story will come away with a whole new appreciation for those men who volunteer for the submarine service."
-- Ken Henry, co-author, Gallant Lady, submarine sailor, retired

“They say you can’t go back. Well, that’s not true. When I read Don Keith’s book on the USS Batfish, I was taken back to that time and place when I was there as a crew member.”
-- William J..Isbell, WWII crew member, USS Batfish SS310