The Ice Diaries—the story of one of the Cold War's most dangerous missions, by Don Keith and Captain William Anderson 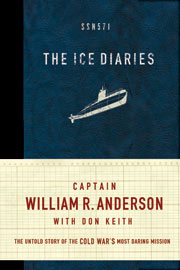 With the U.S. having been beaten into space by the Soviet Union's Sputnik and questions raised about our nation’s ability to prevail in the Cold War, America scored a major triumph under the seas, as the world’s first nuclear powered submarine, the USS Nautilus, traveled beneath the North Pole towards Russian waters.

"LOOK INSIDE THE BOOK," ORDER YOUR COPY OF THE ICE DIARIES

The details behind this daring and historic mission have at last been declassified and are told in this important book, The Ice Diaries, by Don Keith and Captain William Anderson, who commanded the fabled sub.

The idea of navigating below the North Pole was made possible by nuclear power. But the ability to travel farther without resurfacing did not necessarily equate to smooth sailing. Anderson and Keith tell the stories of encounters with terrible storms, fires in the hold, collisions with ice, broken compasses and more, each of which threatened the world's most visible vessel and her 116-man crew. All of this plays against the backdrop of an Eisenhower Administration faced with mounting questions of America’s ability to compete technologically with the Soviets.

Now, for the first time, the complete story of this history-changing event is available, yet it is still primarily a fast-paced adventure story about a brave crew and their amazing ship.

Click HERE to purchase your copy of THE ICE DIARIES.

Click HERE to purchase your copy of the audio book of THE ICE DIARIES.

PRAISE FOR THE ICE DIARIES

"...the most definitive and entertaining first-hand account we'll get...fans of naval history in particular will enjoy this inspirational adventure story...(a) first-rate account."

"Besides providing an insider's perspective on a unique chapter of the Cold War, Anderson's and Keith's vividly rendered The Ice Diaries is also a moving human drama filled with adventure, courage and heart."

“Captain Anderson and the crew of the USS Nautilus exemplified daring and boldness in taking their boat beneath the Arctic ice to the North Pole. This expertly told story captures the drama, danger, and importance of that monumental achievement.”

“Few maritime exploits in history have so startled the world as the silent, secret transpolar voyage of the U.S. Navy’s nuclear submarine Nautilus, and none since the age of Columbus and Vasco da Gama has opened, in one bold stroke, so vast and forbidding an area of the seas.”

"Don Keith and Bill Anderson's The Ice Diaries certainly ranks in the top ten of all submarine books. A true first-person account of the most important submarine accomplishment of the twentieth century."

“A fascinating look at a little-known time in history. Captain Anderson and Don Keith take us on a fast-paced trip with Nautilus exploring under the Arctic ice for the first time at the height of the Cold War. Live this adventure with the man who had the foresight to make it possible and the daring to lead his crew to the North Pole and back.”

"The authors discuss submarine principles with a fervor bordering on passion...(their) calm descriptions of penetrating the ice barriers with only a few feet clearance above and below and navigating in high latitudes where all directions are south...are described in vivid detail."

"The Ice Diaries is a most interesting read.  There is drama and tension throughout the book.  This book should be included in the library of any student of submarine history."