Gallant Lady -- the 'biography' of a most unusual submarine, USS Archerfish

'This engagingly written book is a captivating biography of the Archerfish, its accomplishments, and its crews.' -- WARFARE HISTORY NETWORK/MILITARY HERITAGE MAGAZINE 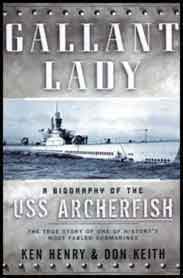 It was the Archerfish that sank the biggest ship ever sent to the bottom by a submarine. She also discovered the deepest point in the Atlantic Ocean and sent two men up from the bottom of the sea in the longest human free ascent in history...an amazing event chronicled by everyone from Time Magazine to the Guinness Book of World Records.

'LOOK INSIDE THE BOOK,' ORDER YOUR COPY OF GALLANT LADY (including audio book, e-book)

And at one point, because of the long period she was away from home port on a crucial, top-secret Cold War mission, she had the only all-bachelor crew in US Navy history, a group accurately dubbed 'The Playboys of the Pacific.'

The stalking of the Japanese aircraft carrier Shinano is one of the most riveting stories of World War II, and Archerfish's amazing actions that night on a moonlit sea south of Tokyo Harbor will leave you breathless. The bravery of Captain Enright and his crew (after Enright had 'won' his command in a poker game) is an inspiring bit of military history.

If you liked the drama of RUN SILENT, RUN DEEP, or thought the antics of the crew of television's MCHALE'S NAVY were farfetched, you'll have to read this story by author Don Keith and meet the decidedly different crew that sailed the world aboard Archerfish. You'll ride along on their amazing voyage as they perform a top-secret mission, crucial to the stare-down with the Soviet Union during the Cold War, but one that took her all-bachelor crew to exotic ports-of-call all over the world...many of which had never seen a submarine before.

They certainly had not seen the likes of the A-fish crew!

Click HERE to order the hardback edition of GALLANT LADY.

Click HERE to order the e-book of GALLANT LADY

'Gallant Lady is an exciting, fast-reading chronicle of the legendary sub. Every submariner wanted the Archerfish. At one point, a waiting list for billets on the sub surpassed 300. Read Gallant Lady and you'll understand why.'
-- Jay Franco, Military Book Club

'The next best thing to serving on the Archerfish is reading this book. It's a great Navy story about a great ship and crew.'
-- Stephen Coonts, author of Flight of the Intruder, Hong Kong, and a total of nine New York Times bestsellers.

'...a never-to-be-forgotten breathtaking saga...we episodically discover why the 'Silent Service' and especially this one submarine totally captivated so many of her postwar crews...'
-- Rod E. Redman, CAPTAIN'S LOCKER

'Gallant Lady doesn't sugarcoat a damn thing... serves it to you barnicles, rust stains and all... and kickstarts your memory cells every other page. Horsefly, I give the damn thing six stars on a five-star scale.'
-- Dex Armstrong, respected submarine storyteller

'I got a real sense of the men who served aboard (Archerfish). the difficulties she faced even in peacetime, and what she and her crew experienced. I agree the book is a 'biography.' As anyone who has been to a commissioning knows, a ship is a living thing. The book has everything going for it: great characters, good plot, and best of all, it's true. A great story!'
-- Larry Bond, co-author (with Tom Clancy) of Red Storm Rising as well as Red Phoenix and four other bestsellers

'The authors have caught the full range, the essence, and the spirit of a near-unbelievable saga of real men doing their duty first, then savoring liberty's rewards to the maximum. The entity unfolds with crisp style and good humor.'
-- Captain Gordon W. Engquist (U.S. Navy Retired), commanding officer of USS ARCHERFISH (AGSS-311) in 1964-65