FINAL PATROL -- The riveting true-life stories behind the submarines that wreaked havoc during World War II. 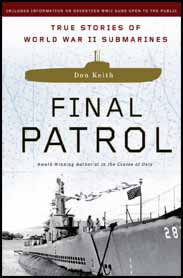 During World War II, the U.S. Navy's submarine service suffered the highest casualty percentage of all the American armed forces, losing one in five submariners. But despite the odds, these underwater warriors accounted for almost 60 percent of Japanese shipping losses, and were a major factor in winning the war. 16 U.S. submarines-and one German U-Boat-that saw action during WWII are now open to the public. Most have been restored and authentically equipped.

"LOOK INSIDE THE BOOK," ORDER YOUR COPY OF FINAL PATROL (hardback, paperback, e-book)

Final Patrol by author Don Keith takes a fascinating look at these subs and the personal stories of the brave sailors who lived, fought, and often died in them. Now, visitors can climb into these cramped steel cylinders, peer through their torpedo tubes, and imagine diving under the sea-perhaps for the last time-to stalk a fanatical enemy who threatened our nation's freedom.

Click HERE to purchase a copy of FINAL PATROL.

"Don Keith takes you to a number of historic submarines that are living museums dedicated to the submarine service. In so doing, he instills the human aspect into what life was like aboard a 'diesel boat' in wartime conditions. This treatise is a valuable tribute to the World War II, Korea and Cold War submarine veterans. The book will make you want to get out of your chair and go see for yourself what a diesel boat is all about." -Jeffrey S. Nilsson, CDR, USNR(Ret), Executive Director, Historic Naval Ships Association

"Keith readably tells the stories of the 16 American (and one German) submarines preserved from World War II...Keith's style (is) engaging."  --Booklist