'These novels put you in the cockpit of a racecar...' 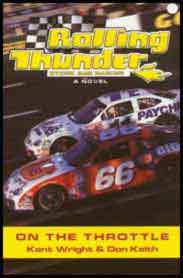 NOW AVAILABLE FOR ALL E-BOOK READERS

READ A FREE SAMPLE OF THIS EXCITING SERIES HERE!

While written on an adult level, this series of exciting books by Don Keith and Kent Wright are perfectly suitable for YOUNGER readers. It is not necessary to read the books in any particular order either. Each work stands on its own. The stories are based on real characters and actual events in the history of racing, from the whiskey-hauling days in Eastern Tennessee and Western North Carolina to the slick, new speedways of today. Many of the actual, real-life legends of the sport make 'appearances' in the books.

The authors have tried to place readers right there in the cockpit of a 700-horsepower racecar!

'The ROLLING THUNDER novels do exactly what they promise to do: put the reader in the pits, behind the scenes, in the cockpit of a racecar, but they also give a compelling look at the personal side of big-time racing. Mostly, though, they are simply great stories about truly interesting people.'  -- Peter Golenbock, Author, The Last Lap: The Life and Times of NASCAR's Legendary Heroes, Co-editor of The Stockcar Racing Encyclopedia, and Co-author, No Fear: Ernie Irvan: The NASCAR Driver's Story of Tragedy and Triumph

As 'racing superstar' Jodell Lee says in the beginning of the book:

'You know how it feels when you see and smell and feel that herd of gaudy monsters, roaring out of the last turn, heading for the green flag, shaking the ground like the stomping of Godzilla, sounding for all the world like the end of time is coming straight at you at nearly two hundred miles an hour? You know how it feels, the power of the motors vibrating in your chest, stunning your ears, your heart pumping in your throat, your arms high in the air as you wave them past, and then you taste the grit of their spent tire rubber in your mouth and their exhaust smells like hot dragon's breath? You know how it looks and feels and smells from up there in the grandstand? Then just imagine how it looks and feels and smells to the old boy behind the wheel of one of those monsters. Just imagine!'

Book Two in the series follows Jodell, Joe and Bubba as they continue their quest for stardom in the burgeoning world of stock car racing. The sport is already spreading beyond its Southern roots, and now moves to gleaming new superspeedways like Daytona. But with the move into serious racing comes danger, dedication, and a need for sponsor money, all at a time when Jodell takes on more and more responsibility. The story of Jodell Lee's triumphant rise to fame comes roaring to life in this, the second book in the ROLLING THUNDER STOCK CAR RACING SERIES!

Click HERE to purchase your copy of ROAD TO DAYTONA.

Now devoted full-time to the pursuit of a big-time NASCAR racing career, Jodell Lee, Bubba Baxter and Joe Banker must face week in and week out the reality of mounting a challenge to Little Joe Weatherly, Buck Baker, Freddy Lorenzen and the other superstars of stock car racing. With the pressures of sponsorships, media coverage, the fans, and the need to win, they must rededicate themselves to excellence in order to reach the pinnacle of the sport. And it all comes at a time when families, sponsors, and employees all come to depend on Jodell's on-track success while the danger of the sport is brought forcefully home in a series of tragedies. Book 3 in the ROLLING THUNDER STOCK CAR RACING SERIES takes us through the turbulent sixties, when real-world change is mirrored in this rapidly expanding sport.

Click HERE to purchase your copy of RACE TO GLORY.

Book Four: ON TO TALLADEGA

Book Four in the series takes our heroes into the '70s and onto the world's fastest speedway at Talladega. Jodell Lee and the crew venture to the opening race at what promises to be the fastest closed course on the planet...the massive Talladega Superspeedway. But once there, they become embroiled in the simmering controversy that threatens the very heart of the sport. Do they dare venture out on what is certainly the most demanding track ever constructed? Or do they join some of the other stars of stock car racing in boycotting this 200-mile-per-hour monster? ON TO TALLADEGA cranks this series up to ever higher speeds...ever higher stakes in the already high stakes world of big-time stock car racing! And the story is set against the backdrop of the turbulent times. Like others in the series, this novel that will appeal to everyone, not just race fans, with its fast-paced action and characters the reader will come to care for.

Click HERE to order your copy of ON TO TALLADEGA.

It's 1999, but Jodell Lee is still looking for wins any place he can find them. He spots an amazing young driver at a small out-of-the-way track and quickly recommends him to his good friend, Billy Winton, who is on the verge of fielding a new Busch Grand National race team. Is 'the kid' the young gun he's been looking for? Can he help land the solid sponsor that will be necessary to compete against the brash but talented newcomers who are quickly making a name for themselves? And what is the secret that the kid seems determined to keep from everyone? Book V in THE ROLLING THUNDER STOCK CAR RACING SERIES takes a giant leap to modern times and gives a rare, accurate and rapid-fire peek into the sport today. Buckle up, strap on your helmet and get read for a wild ride!

Click HERE to purchase your copy of YOUNG GUNS.

Book Six: FIRST TO THE FLAG

The whole sport of NASCAR is still talking about young Rob Wilder's first few races. Now, he must prove he's no flash in the pan as he takes Billy Winton's bright red Ford into his first full season in Grand National racing. Can he continue the string of successes he enjoyed in the last few races of 1999? Can he fulfill the promise he has shown for his major new sponsor? And will his new love interest distract him from the prize that is so close at hand? Climb in and ride right along with 'Rocket Rob' as he attempts to conquer the high banks of Daytona in the wildest race ever captured on paper!

Click HERE to order your copy of FIRST TO THE FLAG.

It was inevitable that Rob Wilder and the rest of the Billy Winton racing crew look to move to Cup racing, the major leagues of stock car competition. But are they making the jump too soon? After all, Rob was driving Saturday night features at dusty, out-of-the-way 'bull rings' only a year before. But the sponsor pushes for the increased exposure. And so does Rob himself. He can't wait to challenge the likes of Earnhart, Jarrett, Martin and Gordon! And it comes at a time when some of the old guard are hinting they will soon give up the sport while a whole crop of new hard-chargers make their debut on the circuit. Can Rob Wilder make an 'inside pass' on the veterans and lead them to the 'checkers?' Find out for yourself in Book 7, which may well have the most exciting racing action of any book in the series so far.

Click HERE to order your copy of INSIDE PASS.

Book Eight: ON THE THROTTLE

Rocket Rob Wilder and the '52' crew are taking the Cup series by storm, challenging for the coveted 'Rookie of the Year' award. But then, in one awful instant on one of the most storied racetracks in the world, the talented young driver encounters the biggest challenge yet. Can he come back and reclaim the momentum? And can he do it on the world's fastest (and arguably the most dangerous) track? And who is this other young driver who bursts onto the scene, intent on making his own mark on the world's fastest sport? Ride the high banks at near 200 miles per hour in the eighth book in this warp-speed series!

Click HERE to order your copy of ON THE THROTTLE.