Wizard of the Wind, the Disc Jockey Novel, by Don Keith

'A compelling look at the personal costs of a seductive business.'
-- BOOKLIST 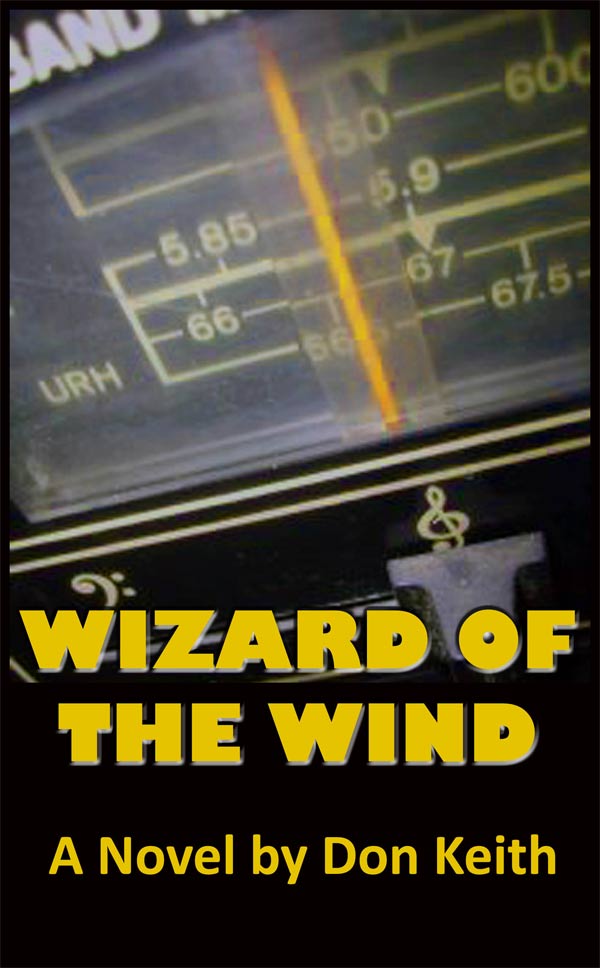 Now re-issued in Kindle and eBook version and a new PAPERBACK edition!  Contains updated material, additional disk jockey dedications, and an author's note that brings this novel up to date with what is happening in today's radio broadcasting business.

Jimmy Gill was only a child when he discovered radio and the wild, new rock and roll music it brought into his home. And, at an early age, he was accidentally immersed in radio's second 'golden age' himself, becoming one of the dee jays who were re-inventing the medium on the fly, fighting off the threat of television in the fifties and sixties.

From his accidental birth into the world of broadcasting, Gill eventually builds a media empire. But when he loses sight of the magic that brought him into the business in the first place, he almost loses all he has built, as well as the two people who matter most to him, his brilliant friend, Detroit Simmons, and Cleo Michaels, the beautiful country music star he loves.

If you've ever been mesmerized by the wizardry of the people who work their magic, distant and unseen, from behind a microphone, or been uplifted by the music spilling from your radio's speaker, then you'll love 'Wizard of the Wind.' And you'll hear the soundtrack playing as you read this remarkable novel by former award-winning broadcaster Don Keith!

Personally dedicated to more than 300 radio personalities...true wizards of the wind!

PRAISE FOR WIZARD OF THE WIND

'It's rare when nostalgia, a flair for storytelling and suspense come together in a single novel. Keith pulls it off with a practiced ear for the sound of the South. A classic rags-to-riches story...Keith writes with enthusiasm and energy.'
-- Scripps Howard News Service

'All the ingredients for a great story...'
-- Publishers Weekly

'Everything you could want in a story, including sex, drugs and rock-and-roll. Don Keith has written a rare and exceptional novel, and one that gets the radio details exactly right.'
-- BILLBOARD Airplay Monitor Magazine

'WIZARD OF THE WIND is a compelling novel that anyone who listens to the radio should read.'
-- RADIO INK Magazine

'A compelling look at the personal costs of a seductive business.'
-- BOOKLIST

'This book will engender the same enthusiasm for radio that was for me...this game of magic and wizards, whether you are just a loyal listener, a student of the medium, or a longtime media professional. Reserve a copy of 'Wizard of the Wind.' You will devour it!'
-- Jaye Albright, consultant, RADIOIQ

'Don Keith has created an absorbing elixir composed of the South, the 60s, the craziness of rock and roll, drug runners, and the raw ego of big-time, big-money broadcasting. And he got it right!'
-- Alan Burns, consultant, Alan Burns & Associates